Oleg Kashin: in Moscow, the voice must go on! 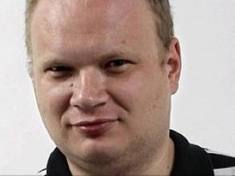 A beaten body with broken fingers and skull fractures was found Wednesday 6, in Moscow. The victim, fortunately alive, is Oleg Kashin, a well-known reporter of the Kommersant journal, an innovative and anti-government magazine since 1992. At first sight, it sounds quite clear the aggressors were sent by someone who dislikes his way of writing. The message printed on Kashin’s broken hands is direct: “without fingers you are forced to stop writing such inconvenient facts. It’s over.” Kashin was used to describe both power games of the government and the deep corruption standing behind the Orthodox Church. His latest articles rely on the recent demonstrations taking place in Moscow, and brutally stopped by the police. President Medvedev is completely indignant about what happened and reassures that the aggressors will be found soon. Why do his words sound so unreliable? Maybe because of previous unresolved murders: Anna Politkovskaya or Anastasia Baburova are significant examples of that. The story of Oleg Kashin, throws a glance on what the Russian journalism is. It requests sacrifice, risk and often death. That’s why the International Press Institute gave the Russian journalism the fifth position in the risk. Kashin did not serve the political power; he was just a spokesman for the truth. He has been showing that journalism is not just made by hands but it goes beyond fingers. Journalism comes from the brave sense of depicting life, from a strong inner voice. Even if Kashin’s aggressors may have said: “It’s over!”, the choral cry of the international community ought to be: “The voice must go on! The world does not need other writing hands but new, young voices denouncing!”