The Burmese Nobel Prize Suu Kyi: an embrace of freedom! 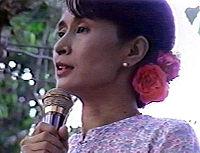 When someone finishes his prison, he is expected to embrace friends and relatives, the people he loves most. Suu Kyi, the Burmese Nobel Prize did not do the same. As soon as she set foot outside her home, where she spent her “punishment”, she embraced her freedom. Suu Kyi, a 65 year-old woman, founded and led the National League for Democracy in 1988, a political party in fight with the government. Her struggle was aimed to the defense of civil and human rights in Burma. Therefore, when the military dictator Saw Maung won the elections, she worked harder to support the voice of her people. In spite of her success at the political elections of 1990, the official government invalidated the public consensus and beat her to prison. Since then, she was under arrest, but she never stopped talking about justice. After 15 years of detention of which 7 of house arrest, she was finally released November 13. Yesterday, Rangoon was crowded with people waiting for her. “Democracy is when the people controls the leader..So I want to be controlled by the Burmese people”, she loudly said, after being released. Suu Kyi, we wish you to ride the freedom just like the freedom has been riding you throughout the wind of courage!